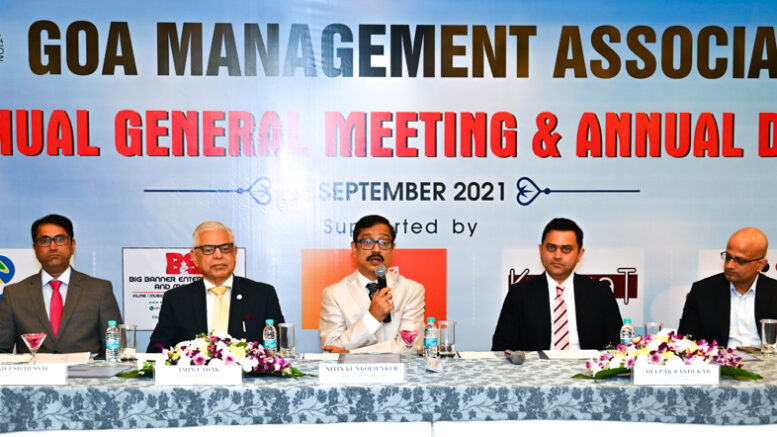 Mr Nitin Kunkolienker, President of GMA, chaired the AGM. In his initial comments, he spoke about the role GMA should play in the state and the need to increase membership and participation. Welcoming the members, he requested the Chairman of the Executive Committee, Mr Amin Ladak, to conduct the proceedings.

Mr Ladak briefed the members about the challenges faced during the pandemic in the past year, and how GMA adapted to the new normal to conduct its activities. Despite hardships, GMA was able to conduct several key programmes.

As Mr Kunkolienkar’s term ended, Mr Ladak informed the members that the Executive Committee deliberated and decided to request Mr Blaise Costabir, Managing Director, GMI Zarhak Moulders, to accept the position of the President of GMA. The Chairman informed that Mr Costabir had accepted the invitation and invited him to join the dais. Mr Costabir’s appointment as President was unanimously applauded by the general body.

Mr Costabir, who was also the Chairman of the GMA Executive Committee during 2003-2006 is the is a first-generation entrepreneur, and founded GMI Zarhak Moulders Pvt. Ltd., an Indo French JV company based in Goa in 1995. He was recently the Chairman of the Goa Chapter of CII. He was also awarded the GMA Manager of the Year Award in 1999.

Mr Costabir addressed the members and spoke of the role GMA can play in the development of young managers. He thanked the members for inviting him and looked forward to working with them in enhancing GMA contributions to society.

Other regular businesses of the AGM was conducted and the meeting was adjourned. The meeting was held in a hybrid format with some members attending physically and others via video conferencing.

The AGM was followed by the Annual Day function.  Mr Richard Rekhy, Board Member, KPMG Dubai was the Keynote Speaker and Mr Shrinivas Dempo, Chairman, Dempo Group of Companies was the Guest of Honour.

The talk was enthusiastically received by the audience.